On 28 September, I took part in one of the ‘Up Late’ events at the Holburne Museum, entitled ‘Women and Creativity’, as part of the FUTURES 2018 European Researchers Night. This event was funded by the EU Commission and aiming to engage the European public in celebrating the latest and most stimulating research as a local and international level (with simultaneous events taking place in over 300 cities, spanning 24 European countries). Our event was a collaboration between the Holburne Museum and the University of Bath Gender and Sexuality Research Cluster

The event explored the connections between Women’s Creativity and their place in society and included pop-up talks, body mapping and a scavenger hunt as well as an opportunity to engage with academics from the University of Bath involved in the research of gender across a number of disciplines. As part of this event, I co-curated a display on women and warfare. The Holburne family has a military history through Captain William and Admiral Frances and the museum includes their traditional representation in the form of uniformed portraits as well as artefacts such as Captain Holburne’s sword. Our display aims to challenge these traditional depictions by including representations of women and warfare and as the accompanying image shows it was both powerful and jarring to see these images alongside more traditional artwork. 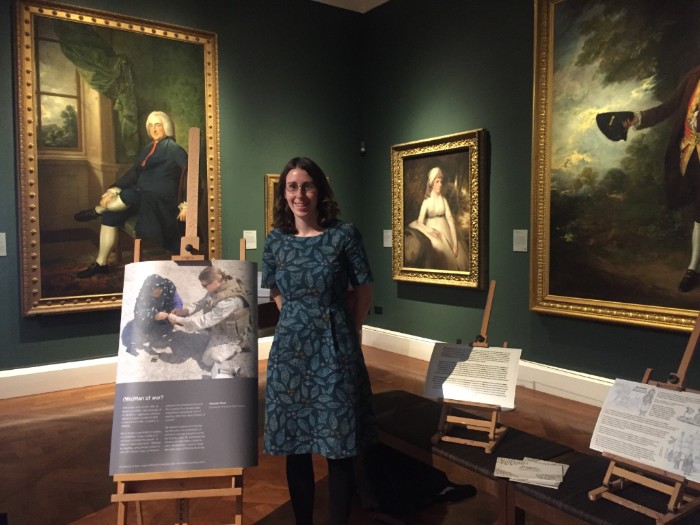 The women and warfare display included my own (winning) submission for the University Images of Research competition 2017 entitled ‘(Wo)Man of war’, alongside display boards from an illustrated essay, ‘Living on the Margins’, on the role of borderland brokers in post-war transitions based on the research of my supervisor, Dr Oliver Walton (http://borderlandsasia.org/living-on-the-margins) and a digital display including the ‘reimagining’ of murals in Northern Ireland to be more positive cultural expressions through the representation of women rather than paramilitary weaponry put together by Dr Sophie Whiting (POLIS) as well as photographs from an exhibition entitled ‘Soldier – Women in the British Army’ (https://www.alisonbaskerville.co.uk/new-page/) by Alison Baskerville, an ex-military photographer.